Visit any crossfit gym any time anywhere and you’re bound to see someone working on their crunches to ultimately work on their six-pack.  Is the crunch the most effective abdominal exercise? Or is it your spine’s worst enemy as some current articles have suggested?

Maybe the truth lies somewhere in between these two extreme beliefs? This article will get to the bottom of the crunch debate and explore the facts about this exercise once and for all! Fact One: Crunches are NOT one of the most effective abdominal exercises.

Which abdominal exercises are the most effective? We’re so glad you asked! The American Council on Exercise completed a study to answer this very question.  Ranking abdominal exercises by the percentage of the muscle that they engaged, they found the following to be the top three abdominal manoeuvres:

The crunch didn't even medal in this ceremony and is not that effective at isolating the abdominal muscles.

Fact Two: Crunching (or ONLY completing any abdominal exercise) does not make a six pack.

You can’t spot-reduce body fat in any area just by performing exercises that target that area. This applies to your abdominal muscles as much as it does to your triceps. Why should you do any strength training then? While working your abs won’t automatically give you a six-pack and completing dips won’t result in body fat vanishing from the underside of your arms, strength training does increase your metabolism (how many calories your body burns).  Burn more calories than you consume and you’ll lose weight.

If you are working out and fuelling your body correctly (NOT trying the latest fad diet), you’ll lose fat.  When you decrease your overall body fat percentage, you'll increase the visibility of your body's muscles.  A low enough overall body fat percentage gets you that much closer to a six-pack. Moral of the story? Do strength train, do incorporate cardiovascular (heart-pumping) workouts, and do watch what you eat to get that six-pack.

Don't challenge your buddy to get into the Guinness Book of World Records for the number of crunches you can complete in 24 hrs.  There are better exercises than a crunch to make that six pack a reality. 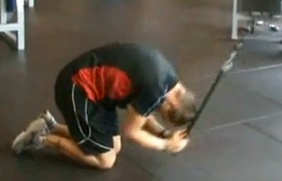 While proper crunch form can have a positive impact on the appearance of your abdominal muscles, it’s not the most efficient way to achieve this goal. Instead, you should focus on exercises that are functional (imitate movements you would perform in daily life) and work multiple muscle groups. Ab crunches on the floor or, even worse, on a weight machine are not similar to movements required by daily life and the latter can be pretty dangerous (at least the way that we see most gym-goers perform them).

Believe it or not, many exercises that focus on other muscles also require your abs.  The push-up and lunge are two exercises that require the abdominal muscles for stability. More advanced push-up and lunge moves like the walking push-up, walking lunge, and lunge with rotation require additional abdominal muscle engagement. Plus, these moves strengthen large muscles that will in turn up your metabolic rate (and calorie burn) even more! It’s a win-win-win!

If you want to be in the gym all day, try the crunch. However, if you want a more efficient workout, move on!

Fact Four: Crunches done with proper form are not inherently dangerous to the general population.

While there may be better ways to work your abs or get a six-pack that isn’t made of beer or diet coke, a crunch is hardly the enemy of the general population. In fact, look at the top three most effective ab-focused exercises and you'll see the cousin of the traditional crunch, the exercise ball crunch taking the bronze!

However, some recent studies have shown that completing thousands of crunches a day can cause harm to your spine.  What gives? For one, the research was completed on pig cadavers, not on humans.  While we can see how studying the spines of pig cadavers might be easier and, of course, far better than harming humans if crunches truly were dangerous, the studies themselves aren’t comparing apples to apples.  Should we totally discredit these studies? We'd prefer you take them with a grain of salt.  Admittedly, many people do not perform crunches properly and there are some cases where you would not want to crunch even if you had all day.

Even with proper form, crunches performed after waking up or after sitting for a long time aren't great for the discs in your spine which will be less tolerant of the stress caused by the bending motion.  Have a herniated disc or other medically diagnosed spinal issue? Crunches won't be part of your (Exercise) X (prescription)!  However, if you are a healthy part of the general population, crunches are not inherently dangerous.

Fact Five: Traditional crunches, unlike exercise ball crunches, recruit your iliopsoas aka hip flexors as well as your abs. Wouldn't this make them more effective for your body in general? Not so fast! Your hip flexors get involved during a crunch because their job is to allow flexion at your hip (hence this common name of your iliopsoas).  Know what else flexes or shortens your hips? Sitting.  Why is this relevant? If you are sitting all day, keeping your hip flexors flexed and then do a bunch of traditional crunches, which also cause hip flexion, you'll make these muscles tighter. This can cause discomfort in your lower back and if you've been sitting all day your low back is likely already not feeling so great.  Whatever can you do? Try out the plank! This exercise and its variations recruit all of the layers of your abdominal muscles and help strengthen your lower back.  All the more reason to ditch the crunch.

Well, there you have it. The crunch, while not inherently dangerous to the general public, can be dangerous to some, bother your back, and is just not all that effective.  We know you and the traditional crunch have been through a lot together (sports seasons, prom, wedding planning…) so if you're not ready to totally let it go, try the exercise ball crunch.

So do you think about crunches are they effective Outright dangerous? Have some other thoughts or feel the need to write an obituary for this exercise? Share your comments in the space below: